How Not to Decide: Motherhood by Sheila Heti

Should one have children? No matter who’s asking the question or in what context, you’re going to get the whole gamut of replies, as proven by this recent Literary Hub survey of authors. Should I have children? Turn the question personal and, even if it’s actually rhetorical, you’ll still get an opinion from every quarter. As The Decision looms over her, the narrator of Sheila Heti’s new novel, a 37-year-old writer from Toronto, isn’t sure who to listen to. Her neurotic inner voice makes her second-guess her life. “The question of a child is a bug in the brain—it’s a bug that crawls across everything, every memory, and every sense of my own future.” Meanwhile, acquaintances and strangers alike all have their two cents to chip in. Everywhere she goes on her book tour, for instance, she hears other people’s stories and has to sift through them. She’s something like the protagonist of Rachel Cusk’s Outline trilogy, though with a stronger personality and internal commentary.

Having a child is an act of creation, and Heti’s narrator worries that she only has sufficient creative energy for one or the other: writing or breeding. Her identity as an artist is so precious to her that she is terrified of giving it up, or watering it down, to risk being a (not very good?) mother. Yet she has the sense that to remain childless she had better come up with a really good excuse. People will want to know what she is going to do with her life instead, and they’re unlikely to be satisfied by the notion that her books are like her babies. 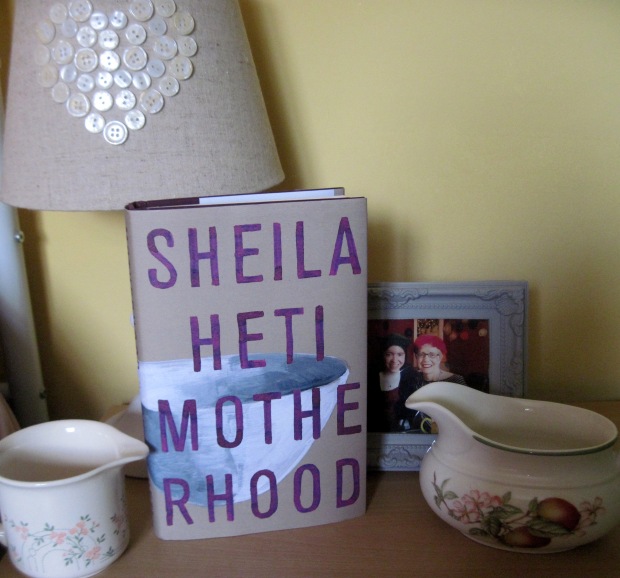 The novel is in short, aphoristic paragraphs and is dominated by cogitation rather than scenes, though there are some concrete events and secondary characters, such as the narrator’s mother; her friend Libby, a new mother; and her partner, Miles, who has a 12-year-old daughter from a previous relationship. The sections are given headings like “PMS,” “Bleeding,” “Follicular,” and “Ovulating,” which suggest the cyclical nature of life: whether she likes it or not, this character is part of a physical process geared towards reproduction.

The cyclical workings of the female body mirror the circularity of her thoughts: she keeps revolving around the same questions, never seeming to get any closer to a decision – though by the end she does decide. The temptation is always to offload the choice onto an external, fate-like force. The narrator wants the oracular voice of the universe to answer everything for her via coin tosses. (Heti writes in a prefatory note that these were based on actual coin tosses.) She asks series of yes/no questions and reports what the coins have to say. It’s a way of avoiding responsibility for her own decision, and produces some truly hilarious passages. Oh, the absurdity of having a dialogue with an impersonal force!

Our heroine does ultimately realize how random and meaningless the coins’ yes/no answers are, but she continues to look outside herself for wisdom: to a fortune teller, psychics, dreams, and even a crazy woman in New York City who hits her up for money. Anything to bypass the wringer of her own mind. She also latches onto the biblical story of Jacob wrestling with the angel, and contrasts this with the symbol of a kitchen knife, which represents a demon that robs her of hope.

Every woman is a daughter as well as a potential mother, and a particularly moving strand of Motherhood is the narrator’s relationship with her female ancestors. Her Hungarian grandmother, Magda, survived Auschwitz only to die of cancer at 53; her mother, a doctor, devoted herself to her career and left the traditional household and childrearing tasks to her husband. This dual legacy of suffering and professional pride helps explain the narrator’s feelings. Deep down, she believes her family line was meant to end in a concentration camp; how dare she continue it now? She also emulates her mother’s commitment to a cerebral vocation – “So I also wanted to be the brains: to be nothing but words on a page.”

Chance, inheritance, and choice vie for pride of place in this relentless, audacious inquiry into the purpose of a woman’s life. I marked out dozens of quotes that could have been downloaded directly from my head or copied from my e-mails and journal pages. The book encapsulates nearly every thought that has gone through my mind over the last decade as I’ve faced the intractable question of whether to have children. I suspect it will mean the most to people who are still unsure or have already decided against children; parents may interpret Heti’s arguments as personal barbs, even though the narrator insists her own decision is not an inherent comment on anyone else’s. It’s a book I could have written, but now don’t have to; Heti has captured brilliantly what it’s like to be in this situation in this moment in time.

Here are a few of my favorite passages. They should give you an idea of whether this book might resonate with you, or at least interest you academically:

“for a woman of curiosity, no decision will ever feel like the right one. In both, too much is missing. What can I say, except: I forgive myself for every time I neglected to take a risk, for all the narrowings and winnowings of my life. I understand that fear beckons to a person as much as possibility does, and even more strongly.”

“I don’t have to live every possible life, or to experience that particular love. I know I cannot hide from life; that life will give me experiences no matter what I choose. Not having a child is no escape from life, for life will always put me in situations, and show me new things, and take me to darknesses I wouldn’t choose to see, and all sorts of treasures of knowledge I cannot comprehend.”

Motherhood was published in the UK by Harvill Secker on May 24th. My thanks to the publisher for the free copy for review. It came out in North America on May 1st (Knopf Canada / Henry Holt and Co.).