Addiction, death, infertility, surgery, transhumanism and vaccines: It’s been quite the varied reading list for the five of us this spring! Lots of science, lots of medicine, but also a lot of stories and imagination.

After some conferring and voting, we have arrived at our shadow panel winner for the Wellcome Book Prize 2018: To Be a Machine by Mark O’Connell. 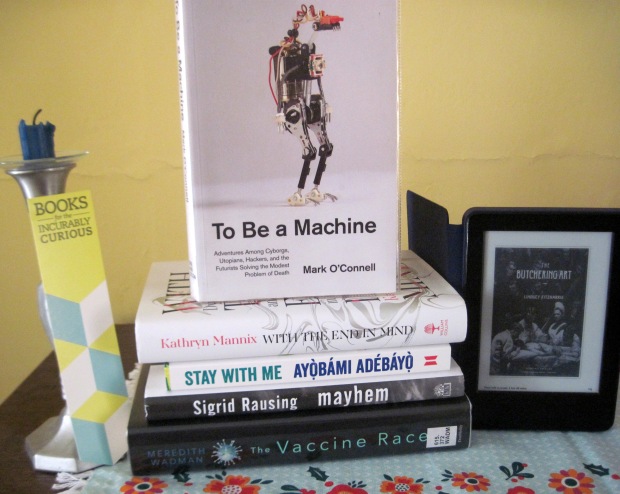 Rarely have I been so surprised to love a book. It’s a delight to read, and no matter what your background or beliefs are, it will give you plenty to think about. It goes deep down, beneath our health and ultimately our mortality, to ask what the essence of being human is.

Here’s what the rest of the shadow panel has to say about our pick:

Annabel: “O’Connell, as a journalist and outsider in the surprisingly diverse field of transhumanism, treats everyone with respect: asking the questions, but not judging, to get to the heart of the transhumanists’ beliefs. For a subject based in technology, To Be a Machine is a profoundly human story.”

Clare: “The concept of transhumanism may not be widely known or understood yet, but O’Connell’s engaging and fascinating book explains the significance of the movement and its possible implications both in the distant future and how we live now.”

Laura: “My brain feels like it’s been wired slightly differently since reading To Be a Machine. It’s not just about weird science and weird scientists, but how we come to terms with the fact that even the luckiest of us live lives that are so brief.”

Paul: “An interesting book that hopefully will provoke further discussion as we embrace technology and it envelops us.”

On Monday we’ll find out which book the official judges have chosen. I could see three or four of these as potential winners, so it’s very hard to say who will take home the £30,000.

Who are you rooting for?