Lisa Ko’s exceptional debut novel, The Leavers, was hand-picked by Barbara Kingsolver for the 2016 PEN/Bellwether Prize for Socially Engaged Fiction, was a finalist for the 2017 National Book Award for Fiction in the States, and is now the launch title for Little, Brown UK’s new imprint, Dialogue Books, which will feature “stories from illuminating voices often excluded from the mainstream,” specifically those “for, about and by readers from the LGBTQI+, disability, working class and BAME communities.” I highly recommend it to fans of Nathan Hill’s The Nix, Atticus Lish’s Preparation for the Next Life and Celeste Ng’s Little Fires Everywhere. It’s an ambitious and satisfying novel set in New York and China, with major themes of illegal immigration, searching for a mother and a sense of belonging, and deciding what to take with you from your past. 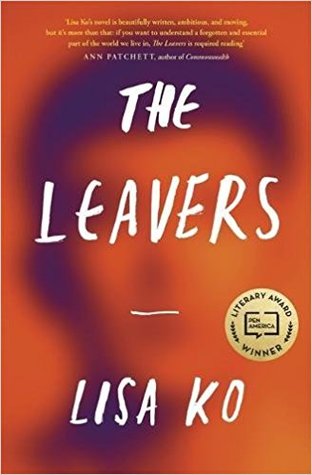 Eleven-year-old Deming Guo and his mother Peilan (nicknamed “Polly”), an undocumented immigrant, live in New York City with another Fuzhounese family: Leon, Polly’s boyfriend, works in a slaughterhouse, and they share an apartment with his sister Vivian and her son Michael. Deming gets back from school one day to find that his mother never came home from her job at a nail salon. She’d been talking about moving to Florida to work in a restaurant, but how could she just leave him behind with no warning?

Ten years later, Deming is Daniel Wilkinson, adopted and raised in upstate New York by a pair of white professors, Peter and Kay. He’s made a mess of his life with drinking and an addiction to online poker, and has been expelled from college. Now the guitar is his life, but even his best friend and bandmate Roland Fuentes isn’t willing to cut him any slack when he doesn’t show up for rehearsals and performances. Peter and Kay are pulling strings to get Daniel accepted into their college, but he keeps screwing up every chance he’s given. He can only hope his efforts to reconnect with his birth mother will be more successful.

The novel shifts fluidly between a third-person account of our protagonist then (Deming) and now (Daniel) and a first-person confession as Polly explains all: her upbringing in poverty in China, her pregnancy out of wedlock, her illegal entry to the United States, and why she had to leave Deming so suddenly. Polly and Deming/Daniel are vibrant characters, and I ached for their struggles. Both have the sense of being split between lives, of “juggling selves.” Their collective story is about figuring out who you are, what can be made right, and what to leave behind as you move forward in life. It’s such a beautiful novel, and an impressive debut from Lisa Ko.

The Leavers will be published in paperback by Dialogue Books on April 26th. My thanks to Little, Brown for the free copy for review.