Wellcome Book Prize Shortlist: Stay with Me by Ayobami Adebayo

“Women manufacture children and if you can’t you are just a man. Nobody should call you a woman.”

On balance, I’m glad that the Wellcome Book Prize shortlist reading forced me to go back and give Stay with Me another try. Last year I read the first 15% of this debut novel for a potential BookBrowse review but got bored with the voice and the story, rather unfairly dismissing it as a rip-off of Chimamanda Ngozi Adichie. I also doubted that the health theme was strong enough for it to make the Wellcome shortlist, but that’s because I hadn’t read far enough to realize just how many medical conditions come up for consideration: it’s not just infertility, but also false pregnancy, cot death (or SIDS), sickle cell disease, and impotence. 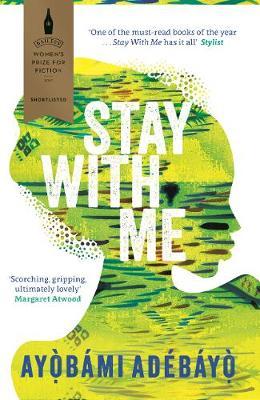 This time around I found Yejide a more sympathetic character. The words that open this review are cruel ones spoken by her mother-in-law. Her desperation to become and stay a mother drives her to extreme measures that also give a window onto indigenous religion in Nigeria: ‘breastfeeding’ a goat on the Mountain of Jaw-Dropping Miracles, and allowing an act of ritual scarification to prevent the return of an abiku, or spirit child (I’ve heard that one narrates Ben Okri’s Booker Prize-winning 1991 novel, The Famished Road).

Polygamy is another Nigerian custom addressed in the novel. Yejide’s husband, Akinyele Ajayi, allows himself to be talked into taking another wife, Funmilayo, when Yejide hasn’t produced a child after four years. There’s irony in the fact that polygyny is considered a valid route to pregnancy while polyandry is not, and traditional versus Western values are contrasted in the different generations’ reactions to polygamy: does it equate to adultery?

There are some welcome flashes of humor in the novel, such as when Yejide deliberately serves a soup made with three-day-old beans and Funmi gets explosive diarrhea. I also enjoyed the ladies’ gossip at Yejide’s hair salon. However, the story line tends towards the soap operatic, and well before halfway it starts to feel like just one thing after another: A lot happens, but to no apparent purpose. I was unconvinced by the choices the author made in terms of narration (split between Yejide and Akin, both in first person but with some second person address to each other) and structure (divided between 2008 and the main action starting in the 1980s). We see certain scenes from both spouses’ perspective, but that doubling doesn’t add anything to the overall picture. The writing is by turns maudlin (“each minute pregnant with hope, each second tremulous with tragedy”) and uncolloquial (“afraid that my touch might … careen him into the unknown”).

Things that at first seemed insignificant to me – the 1993 election results, what happens to Funmi, the one major scene set in 2008 – do eventually take on more meaning, and there is a nice twist partway through as well as a lovely surprise at the end. I did feel the ache of the title phrase as it applies to this couple’s children and marriage, so threatened by “all the mess of love and life that only shows up as you go along.” It all makes for truly effortless reading that I gobbled up in chunks of 50 or 100 pages – which indicates authorial skill, of course – yet this seems to me a novel more interesting for the issues it addresses than for its story and writing.

My gut feeling: I would be very surprised if a novel won two years in a row. While the medical situations examined here are fairly wrenching, Stay with Me isn’t strong enough to win. Its appearance on the shortlist (for the Women’s Prize, too) is honor enough, I think.