On the Road with Ma: The Lauras by Sara Taylor 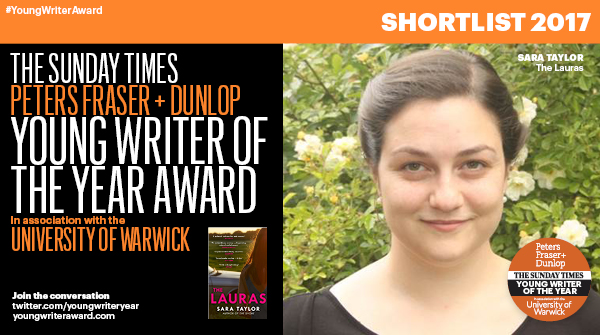 Sara Taylor’s debut, The Shore, was a gritty and virtuosic novel-in-13-stories that imagined 250 years of history on a set of islands off the coast of Virginia. It was one of my favorite books of 2015, and earned Taylor a spot on that year’s Sunday Times Young Writer of the Year Award shortlist as well as the Baileys Prize longlist. Her second book is a whole different kettle of fish: a fairly straightforward record of an extended North American road trip that 13-year-old Alex took with his/her mother 30 years ago.

Alex and Ma have run off from their home in Virginia and left Alex’s father behind. They travel, seemingly at random, all over – North Carolina, Michigan, Mississippi, Nevada, California – stopping for weeks at a time for Ma to earn enough to move on again. On the way they visit various sites from Ma’s past, mostly foster homes where she lived as a runaway teen and made fleeting connections with friends and lovers. Her five best friends were all apparently named Laura. Sometimes it seems Ma is after revenge; other times she’s making amends for mistakes from her past or attending to unfinished business. One thing gradually becomes clear: this is no arbitrary journey but a quest with a destination. It even has a Harold Fry element, though Taylor avoids Rachel Joyce’s schmaltz.

The Lauras is more complex than your average coming-of-age tale, largely because of Alex’s deliberate androgyny: a whole novel passes without us figuring out whether the narrator is male or female. “I suppose I was forgettable, came across still as whichever gender a person expected to see … being either and neither and both at once fit me more closely than the other options on offer,” Alex writes. But this chosen indeterminateness is not without consequences: there are a couple of disturbing scenes of bullying and sexual assault.

I enjoyed the mother-and-teen banter and the depiction of characters who are restless and rootless, driven on by traumatic memories as much as by uncertainty about the future. However, I had a few problems with the book. A road trip is generally a fun fictional setup, but here it tends towards the episodic and the repetitive. Moreover, Ma’s past is generally conveyed by secondhand stories rendered in Alex’s voice, which subordinates Ma’s perspective to her child’s and relies on somewhat dull reportage. Also, the metaphorical language and level of psychological understanding seem too advanced for a young teen, which only emphasizes the disjunction between the events being recounted (perhaps from the 1990s?) and the supposed present day three decades later. Those niggles explain why I abandoned this book a third of the way through on my first attempt in December 2016, and why, for me at least, it overall pales in comparison with the originality of The Shore.

I prefer this cover image.

Bearing in mind that I might be meeting these authors at the shortlist event or prize-giving ceremony, I’m not going to rate the five ST Young Writer books. (It wouldn’t take much sleuthing to find my Goodreads ratings, but never mind.) I’m still a huge fan of Sara Taylor’s work and look forward to her next book; were this to be the consensus of the rest of the shadow panel I would happily recognize it, but it’s unlikely to be one of my top two.

Other reviews of The Lauras:

A life in books

Postscript: Taylor and I have a few neat connections: she graduated from Randolph College (formerly Randolph-Macon Women’s College), whose study abroad program in Reading, England brought me over here for the first time, and when not working on her PhD at UEA lives with her husband in Reading. Plus a tiny mention from The Lauras made me cheer: Ma went to Hood College, my alma mater!