Ironically, Tuesday’s post on all the books I’ve abandoned so far in 2017 was my most popular in ages; it received nearly twice as many views as most of my recent posts. I think readers must find it reassuring that they’re ‘allowed’ to give up on a book rather than struggle through to the end of something they’re really not enjoying. However, I unwittingly stirred up some controversy when I shared the post on a Facebook group for book bloggers and authors and got a few replies along the lines of “I would never write about a book I didn’t like or didn’t finish. It’s not fair to the author.” Hmmm.

Anyway, today I have five pretty much unreserved recommendations instead. An original take on the American Civil War, a retelling of a Shakespearean tragedy, a highly unusual travel book, a creative blending of poems and recipes, and a wonderful book about sisters and betrayal from a Canadian author new to me. I hope you’ll find something here to enjoy.

An entirely believable look at the life of the American soldier in the 1850s and 1860s, this novel succeeds due to its folksy dialect and a perfect balance between adventuresome spirit and repulsion at wartime carnage. While it shares some elements with Westerns and Civil War fiction, it’s unique in several ways. Though thrilling and episodic, it’s deeply thoughtful as well. Thomas writes semi-literate English but delivers profound, beautiful statements all the same. Lovely metaphors and memorable turns of phrase abound. Finally, this book is the most matter-of-fact consideration of same-sex relationships I’ve ever encountered in historical fiction. Heart-breaking, life-affirming, laugh-out-loud: these may be clichés, but here’s one novel that is all these things and more. Truly unforgettable. (See my full review at BookBrowse. See also my related article on the Native American practice of cross-dressing, known as winkte or berdache.) 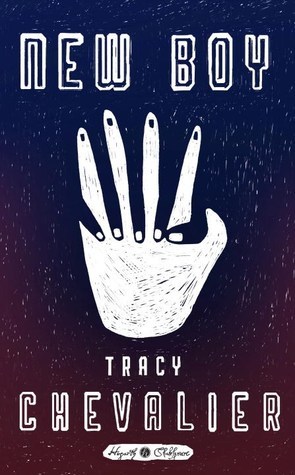 (My second favorite in the Hogarth Shakespeare series, after Margaret Atwood’s Hag-Seed.) Chevalier is known for historical fiction, but here she gives Othello a near-contemporary situation and a backdrop much closer to home: her native Washington, D.C. Spring 1974: it’s Ghanaian diplomat’s son Osei Kokote’s first day at a new school. Fortunately, he’s taken under the wing of one of the most popular sixth grade girls, Dee, and they’re soon inseparable. The novel takes place all in one day, divided into discrete sections by recess periods and a lunch break. Jump rope rhymes, jungle gyms, kickball games, arts and crafts, and a typical cafeteria meal of Salisbury steak and tater tots: it’s impressive how Chevalier takes ordinary elements and transforms them into symbols of a complex hierarchy and shifting loyalties. The language of possession and desire felt overly dramatic to me when applied to eleven-year-olds. However, it’s a remarkable exploration of the psyche of a boy isolated by his race. (Full review forthcoming at the Pittsburgh Post-Gazette website.)

Cook is a crime writer. In this out-of-the-ordinary travel memoir he blends personal experience and history to tell of the ‘dark places’ he’s drawn to visiting. In 28 chapters that jump around in chronological order, he chronicles journeys he’s made to places associated with war, massacres, doomed lovers, suicides and other evidence of human suffering. Some are well known – Lourdes, Auschwitz, Verdun and Ground Zero – while others, like a Hawaiian leper colony and the hideaway of a fifteenth-century serial killer, require more background. A section on Okinawa and Hiroshima is among the book’s highlights: excellent descriptions of the mass suicide rooms where the Japanese retreated as the Americans approached and the atomic bomb drop itself bring history to life. But the most memorable chapter of all is one in which suffering touches Cook in a personal way. A meditative and often melancholy picture of humanity at its best and worst. (See my full review at Nudge.)

Eat This Poem: A Literary Feast of Recipes Inspired by Poetry

This arose from Gulotta’s blog of the same title. It’s a luscious mix of food-themed poems – none of which I’d ever encountered before, even if certain of the poets were familiar to me (like Mary Oliver, Sharon Olds and Wendell Berry) – commentary, personal anecdote and recipes that manage to hit the sweet spot in a Venn diagram between trendy, frugal, simple and indulgent. I could see myself making and eating any of these recipes, but my eye was particularly drawn to baked sweet potatoes with maple yogurt, vanilla-pear crumble, butternut squash macaroni and cheese, olive oil pumpkin bread, and cornmeal waffles. It might seem like this is a book that would only have niche appeal, but I don’t think that’s the case. Whether you like to cook or just like to eat, whether you love poetry or struggle to understand it, I’d recommend this for pleasant occasional reading. It only misses out on five stars because some of the observations are fairly obvious; these poems mostly speak for themselves.

A Student of Weather 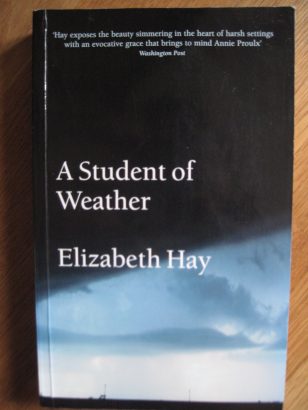 Set between the 1930s and 1970s, Hay’s debut (shortlisted for Canada’s Giller Prize in 2000) focuses on a pair of sisters, Norma Joyce and Lucinda Hardy, and the frostbitten young weather researcher who stumbles upon their Saskatchewan farmhouse one January evening in 1938. “Two sisters fell down the same well, and the well was Maurice Dove.” Seventeen-year-old Lucinda became the capable family housekeeper after their mother’s death. Norma Joyce is a precocious, sneaky eight-year-old. On each of Maurice’s visits, and in the years to come, they quietly jostle for his attention. Despite the upheaval of war and a move to Ontario, some things never change. Hay lends her story allusive depth by referencing biblical pairs of opposites: Jacob and Esau, Mary and Martha, and the Prodigal Son and his jealous older brother. My favorite parts were when the sisters were together in Canada; once Norma Joyce moves to New York, the book starts drifting a bit. However, there are such astute observations about what goes on in family and romantic relationships, and many perfect sentences. I thoroughly enjoyed reading this slowly over the course of a month, and I’d gladly read anything else from Hay.