Failing at Classics of the Month

I’ve attempted two Dickens novels in the last five years, and left both unfinished. I at least got about 200 pages into Dombey and Son in 2012 before I gave up, but my recent attempts to get past the first couple of chapters in Our Mutual Friend have been utterly unsuccessful. I finally gave myself permission to set it aside at page 41 – and I didn’t even read all of that; I’d started skimming in a last-ditch attempt to get myself hooked by the story. Have I lost my Dickens mojo? Do I not have sufficient patience to read Victorian triple-deckers anymore? I truly hope this is just a phase and I’ll be able to get back into Dickens someday. I certainly intend to read his whole oeuvre eventually, even the obscure ones.

So I don’t have a classic for April, nor a true doorstopper (I’ve classified David France’s How to Survive a Plague as such – a bit of a cheat since I only skimmed it). Instead what I have to offer are a modern classic and a graphic adaptation of another Dickens novel.

On the Black Hill by Bruce Chatwin, which I mostly read during our trip to Hay-on-Wye earlier in the month, is worthy of being called a modern classic. It has echoes of D.H. Lawrence and especially Thomas Hardy, and it’s a pleasantly offbeat look at the developments of the twentieth century as seen through the lives of Welsh identical twins Benjamin and Lewis Jones. Opening in the 1980s, when the brothers are eccentric old gents sleeping side by side in their late parents’ bed, the book then retreats to the beginning: at the turn of the last century ornery Amos Jones fell for an educated rector’s daughter and their volatile relationship played out at The Vision farm. One son was caught up in the First World War, one had love affairs; neither “ever strayed further than Hereford.” Through sickness, community scandal, and the rise and fall of fortunes, they remain wedded to Welsh village life.

“The Vision” farm is in the background to the right.

I especially loved Chatwin’s descriptions of the natural world (he’d visited Radnorshire as a boy and considered it a kind of spiritual home), and the glimpses he gives into the twins’ preternatural closeness:

Lewis and Benjamin gambolled ahead, put up grouse, played finger-football with rabbit-droppings, peered over the precipice onto the backs of kestrels and ravens and, every now and then, crept off into the bracken, and hid. They liked to pretend they were lost in a forest, like the Twins in Grimms’ fairy-tale, and that each stalk of bracken was the trunk of a forest tree. … They lay on their backs and gazed on the clouds that crossed the fretted patches of sky … they would press their foreheads together, each twin losing himself in the other’s grey eye.

(Clearance book from Blackwell’s in Oxford.

The David Copperfield graphic novel by Jacqueline Morley (illustrated by Penko Gelev) is part of the Graffex series of graphic novel literary retellings issued by Salariya Book Company. It’s remarkably faithful to Dickens’s original, with just a bit of condensing in terms of the plot and a few secondary characters cut out or greatly reduced in importance. Although this is no substitute for reading David Copperfield itself (my favorite book), I could see it being useful for high school or college students who need a quick recap of what happens when preparing for a quiz or essay. The three main young females are amusingly similar and idealized, but all the other characters’ looks are true to the novel’s descriptions (and previous adaptations). The end matter – a brief biography of Dickens, commentary on the novel, a timeline of stage and screen versions – is particularly helpful, though in the chronology of Dickens’s works they forgot Dombey and Son! 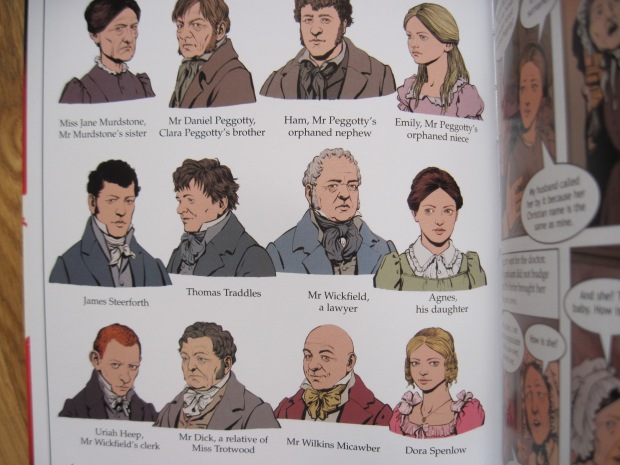 Next month: I’ve pulled out a couple of short (~210 pages each) classics from the shelf. I recently read a graphic novel about Gauguin that I’ll be reviewing on Monday, so I fancy following it up with W. Somerset Maugham’s The Moon and Sixpence, which is said to be based on Gauguin’s life. It’ll be only my second Maugham after Of Human Bondage, which I loved in 2015. Anna of the Five Towns will be my first taste of Arnold Bennett’s fiction (though I’ve read his Literary Taste).