Classic of the Month: The Tenant of Wildfell Hall

Thank you to those who recommended Anne Brontë’s The Tenant of Wildfell Hall (1848) as my classic for March. I’m glad I read it, not least because, like Narcissism for Beginners, it’s an epistolary within an epistolary – bonus! I imagine most of my readers will already be familiar with the basic plot, but if you’re determined to avoid spoilers you’ll want to look away from my second through fourth paragraphs. 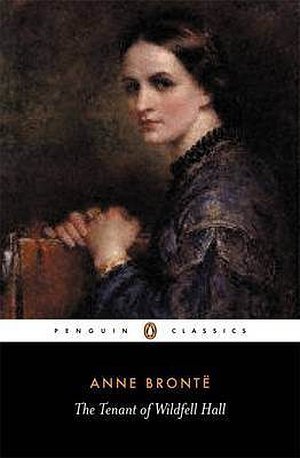 The chronology and structure of the novel struck me as very sophisticated: in 1847, gentleman farmer Gilbert Markham is writing a detailed letter to a friend, describing how he fell in love with the widow Helen Graham – the new tenant at Wildfell Hall, a painter who’s living there in secret – starting in the autumn of 1827. (I even wondered if this could have been one of the earliest instances of a female author writing from a male point-of-view.) Their interrupted and seemingly ill-fated courtship reminded me of Lizzy and Darcy’s in Pride and Prejudice: Gilbert initially thinks Helen stubborn and argumentative, especially in how she refuses to accept neighbors’ advice on how to raise her young son, Arthur. Gradually, though, he comes to be captivated by this intelligent and outspoken young woman on whose “lofty brow … thought and suffering seem equally to have stamped their impress.”

And indeed, at the heart of Gilbert’s narrative is a lengthy journal by Helen herself, starting in 1821, explaining the misfortune that drove her to take refuge in the isolation of Wildfell Hall. For, as in Anne’s sister Charlotte’s Jane Eyre, there’s an impediment to the marriage of true minds in the form of a living spouse. Helen is still tied to Arthur Huntingdon, a dissolute alcoholic she married against her family’s advice and has ever since longed to see reformed. In a phrase I was highly bemused to see in use in the middle of the nineteenth century, she defends him thusly: “if I hate the sins I love the sinner, and would do much for his salvation.” The novel’s religious language may feel outdated in places, but the imagined psyche of a woman who stays with an abusive or at least neglectful partner is spot on.

For the most part I enjoyed the story line, but I must confess that I wearied of Helen’s 260-page account, filled as it is with repetitive instances of her incorrigibly loutish husband’s carousing. I had a bit too much of her melodrama and goody-goody moralizing, such that it felt like a relief to finally get back to Gilbert’s voice. The last 100 pages, though, and particularly the last few chapters, are wonderful and race by. I loved this late metaphor for Helen’s chastened beauty:

This rose is not so fragrant as a summer flower, but it has stood through hardships none of them could bear. The cold rain of winter has sufficed to nourish it, and its faint sun to warm it; the bleak winds have not blanched it or broken its stem, and the keen frost has not blighted it. Look, … it is still fresh and blooming as a flower can be, with the cold snow even now on its petals.

I moved The Tenant of Wildfell Hall up my to-read pile because it’s on the “Ten Best Novels for Thirtysomethings” list in The Novel Cure. I imagine Ella Berthoud and Susan Elderkin included it because the main plot and some subplots revolve around the unsuitable relationships people often find themselves trapped in: perhaps after the passion and idealism of one’s twenties, one’s thirties are more likely to be blighted by regret as the consequences of poor choices come to light.

As always, I’m dumbfounded by the Brontës’ profound understanding of human motivation and romantic love given their sheltered upbringing. Theirs were wild hearts. I’ll always be a Charlotte fan first and foremost, but I was delighted with my first experience of Anne’s work and look forward to trying Agnes Grey in the near future.

Lest you think Victorian literature is all po-faced, righteous ruminating, I’ll end with my favorite funny quote from the book. This is from Gilbert’s snide, sporty brother Fergus (I wish he’d had a larger role!), seeming to mock Jane Austen with this joke about needing to know everything about Helen Graham as soon as she arrives in town:

“mind you bring me word how much sugar she puts in her tea, and what sort of caps and aprons she wears, and all about it, for I don’t know how I can live till I know,” said Fergus very gravely. But if he intended the speech to be hailed as a masterstroke of wit, he signally failed, for nobody laughed. However, he was not much disconcerted at that; for when he had taken a mouthful of bread and butter, and was about to swallow a gulp of tea, the humour of the thing burst upon him with such irresistible force that he was obliged to jump up from the table, and rush snorting and choking from the room.

Next month: Eleanor of Elle Thinks recommends Our Mutual Friend as the book that will finally get me back into Dickens, so I plan to make it do double duty as my Classic and Doorstopper for April.