All the Lonely People*

Last week I finished two books, one fiction and one nonfiction, that had loneliness as a central theme – although their treatment of the subject was vastly different.

First was Quartet in Autumn by Barbara Pym, which was recommended to me by various bloggers and certainly lived up to their praise. Originally published in 1977, this was Pym’s seventh novel out of nine; she died in 1980. It’s about four London office workers, all sixty-somethings who are partnerless and don’t have, or at least don’t live with, any immediate family members. We never learn what they do in this office; in fact, Edwin, Norman, Letty and Marcia don’t seem to be filling much of a need, especially given the fact that the two old girls aren’t replaced when they retire midway through the novel. 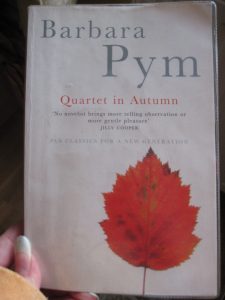 For as long as they’ve been working together, the four haven’t given in to the usual human impulse to know and be known. At first there doesn’t seem to be much to know about them; with only one or two shorthand facts apiece it’s a minor challenge to tell them apart. Widower Edwin’s hobby is attending Anglican services; Norman lives off fried food and visits his brother-in-law in hospital; Letty lives in a boarding house and has a friend in the countryside; Marcia has had a mastectomy and hoards tinned food and empty milk bottles.

But for all of them a line applied to Letty holds true: “It was a comfortable enough life, if a little sterile, perhaps even deprived.” Especially after her retirement, Letty knows “she must never give the slightest hint of loneliness or boredom, the sense of time hanging heavy.”

From what I’d heard about Pym, I might have expected a lighthearted satire about country manners and Anglican vicars. Perhaps that’s a fair assessment of some of her earlier books? But this is much darker, and the humor always has a bitter edge:

Overall it’s quite a melancholy little book, a warning against letting your life become too small and private. Yet the last line, remarkably, is a sudden injection of optimism: “it made one realize that life still held infinite possibilities for change.” I’d recommend this to readers who have enjoyed Mrs. Palfrey at the Claremont by Elizabeth Taylor.

As an unwittingly positive counterpart, I was at the same time reading How to Be Alone by Sara Maitland. This is part of a School of Life series that turns the “how-to” concept on its head: instead of areas where we think we need instruction, the books are about areas where we feel like experts, topics so simple or automatic they don’t seem to need explanation (e.g. How to Be Bored, or How to Age).

I feel it’s important to point out that the author’s last name is spelled wrong on the cover!

But Maitland argues that although being alone is easy to achieve, there is an art to doing it properly, and solitude and loneliness are by no means the same thing. She knows whereof she speaks: though she grew up in a large Catholic family, after her divorce she moved to a remote area of Scotland and lives alone in a house a quarter mile from the nearest road.

Despite our modern obsession with self-confidence and fulfilling relationships, Maitland believes “the present paradigm is not really working.” More of us than ever are depressed and afraid to spend time alone lest it might make us appear selfish, pathetic or in some way unlovable.

Profiling everyone from the Desert Fathers of early Christianity to the Romantic poets, she counters by enumerating all the benefits that solitude confers: self-knowledge and a rest from constant relating (that goes for extroverts as well as introverts), a connection to nature and to the divine, and the freedom to create. She convinced me, and includes a great bibliography of further reading about solitude.

*I only found out the other week that Eleanor Rigby “picks up the rice” in a church. For my entire life I’d thought she “picks up her ice” (granted, that doesn’t make much sense, but the Beatles could be trippy lads). You learn something new every day!