Laura Kaye’s impressive debut novel, English Animals, is a fresh take on themes of art, sex, violence and belonging. It has particular resonance in the wake of Brexit, showing the apparent lack of a cohesive English identity in spite of sometimes knee-jerk nationalism.

The novel takes place within roughly a year and is narrated by Mirka Komárova, a 19-year-old Slovakian who left home suddenly after an argument with her parents and arrives in the English countryside to work for thirty-somethings Richard and Sophie Parker. She doesn’t know what to expect from her new employers: “Richard and Sophie sounded like good names for good people. But they could be anything, they could be completely crazy.”

It’s a live-in governess-type arrangement, and yet there are no children – Mirka later learns that Sophie is having trouble getting pregnant. Instead Mirka drives the volatile Parkers to the pub so they can get drunk whenever they want, and also helps with their various money-making ventures: cooking and cleaning for B&B guests and the summer’s wedding parties, serving as a beater for pheasant shoots, and assisting with Richard’s taxidermy business. Her relationship with them remains uncertain: she’s not a servant but not quite an equal either; it’s a careful friendship powered by jokes with Richard and cryptic crossword clues with Sophie.

At first Mirka seems disgusted by Sophie’s shabby family home and the many animals around the place, both living and dead. Initially squeamish about skinning animal corpses, she gets used to it as taxidermy becomes her artistic expression. Taking inspiration from whimsical Victorian portraits of dead animals in costume, she makes intricate modern tableaux with names like Mice Raving, Freelance Squirrels and Rats at the Office Party. When her art catches the eye of a London agent, she starts preparing her pieces for an exhibit and is the subject of a magazine profile. The interviewer writes this about her:

Mirka is someone who understands the philosophical nature of her art. How, in our strange condition of being simultaneously within and outside the animal kingdom, we invest taxidermy with our longing for permanence.

I loved the level of detail about Mirka’s work – it’s rare to encounter such a precise account of handiwork in fiction, as opposed to in nonfiction like Edmund de Waal’s The Hare with Amber Eyes and David Esterly’s The Lost Carving; Kaye herself is a potter, which might explain it – and I appreciated the many meanings that dead animals take on in the novel. They’re by turns food, art objects and sacrificial victims. Taxidermy is a perfect juxtaposition of physicality and the higher echelons of art, a canny way of blending death and beauty.

But of course the human residents of this community also fall into the title’s category: Many of them are what you might call ‘beastly’, and the threat of violence is never far away given Richard and Sophie’s argumentativeness. A promiscuous blonde, Sophie reminded me of Daisy in The Great Gatsby, so often described as careless: “You are a dangerous person, Sophie,” Mirka says. “Don’t say that. I didn’t mean to hurt anything.” Mirka replies, “You don’t care about other things. Everything is a game. Everyone is a toy for you to play with.”

The two different blurbs I’ve seen for the book both give too much away, so I will simply say that there’s an air of sexual tension and latent hostility surrounding this semi-isolated home, and it’s intriguing to watch the dynamic shift between Richard, Sophie and Mirka. I felt that I never quite knew what would happen or how far Kaye would take things.

I did have a few minor misgivings, though: sometimes Mirka’s narration reads like a stilted translation into English, rather than a fluent outpouring; there’s a bit too much domestic detail and heavy-handed symbolism; and the themes of xenophobia and homophobia might have been introduced more subtly, rather than using certain characters as overt mouthpieces.

All the same, I read this with great interest and curiosity throughout. It’s a powerful look at assumptions versus reality, how we approach the Other, and the great effort it takes to change; it’s easier to remain trapped in the roles we’ve acquired. I’d recommend this to readers of Polly Samson, Francesca Segal and even Rachel Johnson (the satire Shire Hell). In particular, I was reminded of Shelter by Jung Yun and Little Children by Tom Perrotta: though suburban in setting, they share Kaye’s preoccupations with sex and violence and the ways we try to hide our true selves beneath a façade of conformity.

This is one of the most striking debut novels I’ve encountered in recent years; it’s left me eager to see what Laura Kaye will do next.

English Animals was published by Little, Brown UK on January 12th. My thanks to Hayley Camis for the review copy.

I was delighted to be asked to participate in the blog tour for English Animals. See below for details of where other reviews and features have appeared or will be appearing soon. 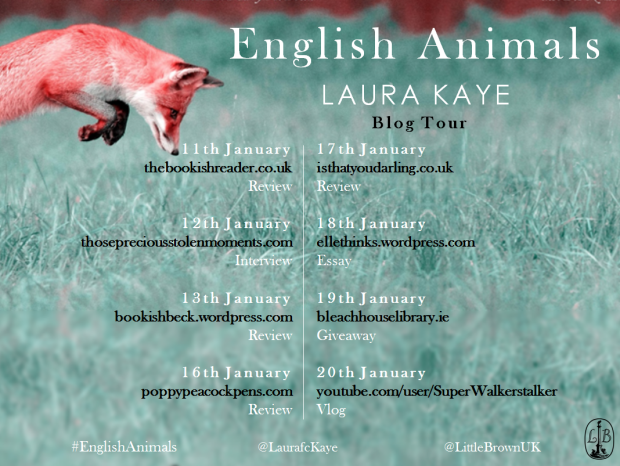