Back in April I reviewed five books about cats, several of which proved to be a mite disappointing. I’m happy to report that in the meantime I have searched high and low and found some great books about cats that I would not hesitate to recommend to readers with even the slightest interest in our feline friends. I’ve got a book of trivia, a set of heart-warming autobiographical anecdotes, two books of poems, a sweet memoir, and – best of all – a wide-ranging new book that combines the science and cultural history of the domestic cat.

This one’s geared towards children, but I enjoyed the format: each page pairs a cute cat photo with a piece of trivia you might or might not have known. I learned a few neat things: 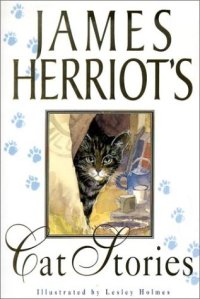 When I was a child my mother and I loved Herriot’s memoirs of life as a primarily large-animal veterinarian in Yorkshire. One story from this volume – the final, Christmas-themed one – is familiar from a picture book we brought out around the holidays. The rest are all drawn from the memoirs, though, so the fact that I don’t remember them must be a function of time; it could be as many as 22 years since I last picked up a Herriot book! In any case, these are charming tales about gentle medical mysteries and even the most aloof of stray cats becoming devoted pets. I especially liked “Alfred: The Sweet-Shop Cat” and “Oscar: The Socialite Cat,” about two endearing creatures known around the village. I also appreciated Herriot’s observation that “cats are connoisseurs of comfort.” With cute watercolor illustrations, this little book would make a great gift for any cat lover.

I Could Pee on This: And Other Poems by Cats by Francesco Marciuliano

Cat owners must own a copy for the coffee table. That’s just not negotiable. You will recognize so many of the behaviors and attitudes mentioned here. This is a humor book rather than a poetry collection, so the quality of the poems (all from the point-of-view of a cat) is kind of neither here nor there. Even so, Chapter 1 is a lot better than the other three and contains most of the purely hilarious verses, like “I Lick Your Nose” and “Closed Door.” Favorite lines included “I trip you when you walk down the stairs / So you know I’m always near” and “I said I could sit on your lap forever / Don’t you even think of trying to get up / Well, you should have gone to the bathroom beforehand”. “Sushi” is a perfect haiku with a kicker of a last line: “Did you really think / That you could hide fish in rice? / Oh, the green paste burns!” 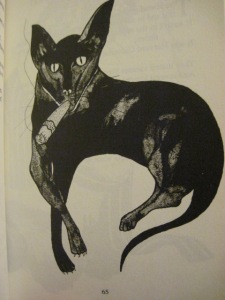 A cute set of poems, most of them describing different breeds of domestic cats and a few of the big cats. There are a lot of puns and jokes along with the end rhymes, making these akin to limericks in tone if not in form. My favorite was “Skimpy the Stray?” – about a wily cat who wanders the neighborhood eliciting sympathetic snacks from various cat lovers. “The routine still goes on, so I mustn’t be too catty, / But she ought to change her name from ‘Skimpy’ into ‘Fatty’.” Our cat had a habit of stealing neighbor kitties’ food and a history of “going visiting,” as the shelter we adopted him from put it, so this particular poem rang all too true. The illustrations (by Lalla Ward, wife of Richard Dawkins) are also great fun.

Originally from 1967, this lighthearted memoir tells of Tovey’s life in a Somerset village with her husband Charles, two demanding Siamese cats named Solomon and Sheba, and Annabel the donkey. “Nobody misses anything in our village,” Tovey remarks, and along with her charming anecdotes about her pets there are plenty of amusing encounters with the human locals too. In my favorite chapter, Annabel is taken off to mate with a Shetland pony and Solomon has a tussle with a hare. I can recommend this to fans of animal books by Gerald Durrell and Jon Katz. Tovey wrote a whole series of books about her various Siamese cats and life in a 250-year-old cottage. I found a copy of Cats in the Belfry on my visit to Cambridge and will probably read it over Christmas for a cozy treat.

The Lion in the Living Room by Abigail Tucker

Now this is the amazing cat book I’d been looking for! It’s a fascinating interdisciplinary look at how the domestic cat has taken over the world – both literally and figuratively. A writer for Smithsonian magazine, Tucker writes engaging, accessible popular science. The closest comparison I can make, style-wise, is to Rebecca Skloot’s The Immortal Life of Henrietta Lacks, even though that has much heavier subject matter.

The book traces domestic cat evolution from the big cats of the La Brea tar pits to the modern day, explaining why cats are only built to eat flesh and retain the hunting instinct even though they rarely have to look further than their designated bowls for food nowadays. Alongside the science, though, is plenty of cultural history. You’ll learn about how cats have been an invasive species in many sensitive environments, and about the bizarre, Halloween-scary story of the Toxoplasma gondii parasite. You’ll meet the tender hearts who volunteer for trap, neuter and release campaigns to cut down on the euthanizing of strays at shelters; the enthusiasts who breed unusual varieties of cats and groom them for shows; and the oddballs who buy into the $58 billion pet industry’s novelty accessories.

The lion in my living room.

From the earliest domestication of animals to the cat meme-dominated Internet, Tucker – a cat lady herself, as frequent mentions of her ginger tom Cheeto attest – marvels at how cats have succeeded by endearing themselves to humans and adapting as if effortlessly to any habitat in which they find themselves. A must for cat lovers for sure, but I don’t think you even have to be a pet person to find this all-embracing book pretty enthralling.

Up next: The Church Cat, an anthology from a recent charity shop haul; The Cat Who Came for Christmas by Cleveland Amory, Cat Sense by John Bradshaw, and Talk to the Tail by Tom Cox from the public library.

Whether you consider yourself a cat lover or not, do any of these books appeal?