Today, July 7th, happens to be my ninth wedding anniversary. For Michel Faber, however, it marks a more somber occasion: two years since his wife, Eva, died of cancer. They met in 1988 and got to spend over 25 years together. It was a second marriage for Eva, a visual artist – a bohemian life full of travel and each working on their art, until a six-year battle with multiple myeloma (a cancer of the bone marrow) cut Eva down in her fifties. 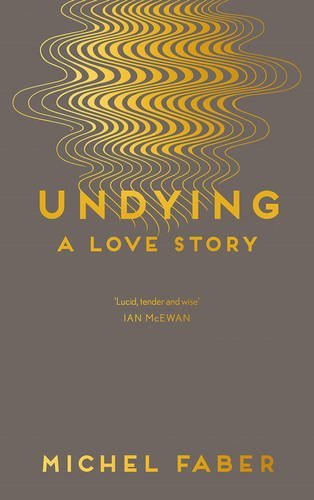 Faber’s new book, Undying: A Love Story, is a striking outpouring of 67 poems, most of them written in 2014–15, after Eva died. In two halves, it takes up first Eva’s illness and death, and then the aftermath and memories. Faber gives a vivid sense of how completely cancer changed both their lives: “There were three of us in our marriage. / You, me, and your cancer.” Eva’s illness put everything into perspective: “In our former lives, B.C., / all sorts of issues seemed to matter – / like minor wastes of money, and a scarcity / of storage space.”

The poems vary widely in stanza length and style. With only a few exceptions, they are in the first person – “I” and “we” – and addressed directly to Eva as “you,” even after she was gone. In one of my favorites, “You Loved to Dance,” Faber remembers the rare occasions in their relationship when they danced together and shakes his head over lost opportunities: “A thousand chances that we didn’t take. … Half a dozen dances in a quarter-century. / I doubt you thought that that was all there’d be.”

Although this is mostly free verse, the occasional rhyming couplet ends a poem:

Yes, let us not leave off praying.

Not for God our soul to keep

but just to die, of old age, in our sleep.

The hotel hopes I have enjoyed my stay.

As you can see from those last lines, the tone is gently sardonic. Faber’s strategy is often to hold up physical artifacts of Eva’s life – the hundreds of menstrual pads she’d accumulated, only to go through early menopause (“Change Of Life”); the odd foodstuffs he found in their cupboards after her death and tried to use up (“Tamarind”) – and turn them to gently mocking commentary on all the futile plans we make. Most ironic of all is “Or, If Only,” in which he catalogues all the ways life can kill you when you don’t want it to, whereas by the end Eva longed for an easy way out: “We’d jump at any offer. / Any speedy death would do us.”

In subject matter and tone I would liken these poems to Christian Wiman’s and Christopher Reid’s. Wiman is a poet and theologian who has himself been through the trenches – long, painful years of treatment for blood cancer. Christopher Reid’s A Scattering is a poetic reflection on his wife Lucinda’s death from a brain tumor. Though you can sense the rich emotion in the poems of Undying, Faber doesn’t quite match either of these authors for craft. His talent is better suited to the expansive world of a novel like The Crimson Petal and the White.

I was thus dismayed to read in this book’s publicity materials that Faber does not intend to write any more fiction – “[Eva’s] death is a major factor in his decision not to write any further novels. A talented artist, she set aside her career to help further his, despite his protestations – and he is dedicating much of the rest of his life to making her work better known.” Faber’s The Book of Strange New Things was one of my most memorable reads from 2014. The story of an interplanetary missionary separated from his wife, it takes on new ache when you realize Faber was writing it in the shadow of his own wife’s death. If, indeed, it was to be his last novel, it’s appropriate that it gives such a poignant portrait of a marriage.

I’ll keep hoping that Faber writes more fiction. In the meantime, any fan of his writing should get hold of these tender, elegiac poems.

All I can do, in what remains of my brief time,

is mention, to whoever cares to listen,

that a woman once existed, who was kind

and beautiful and brave, and I will not forget

how the world was altered, beyond recognition,