Five Things I Loved about the BBC War & Peace Miniseries

As soon as I got back from the States in January, my husband and I rushed to catch up on the BBC’s War & Peace miniseries. It’s the latest costume drama from screenwriter Andrew Davies, who is behind many favorite literary adaptations, including Bleak House (2005). I enjoyed War & Peace much more than I expected to given my utter unfamiliarity with Russian literature. I can’t comment on how well the miniseries captures Tolstoy’s plot or tone; my response is just that of a literature lover who appreciates gripping television. (My understanding is that this has already shown in North America too, on various networks, but for those who haven’t watched it and still plan to, I’ll avoid spoilers in what follows.) 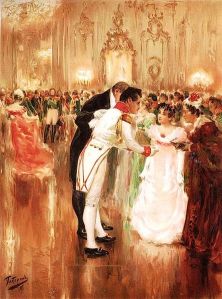 1. It’s like Jane Austen – but not quite. Although Tolstoy wrote it in 1869, War & Peace is set during the Napoleonic Wars (1803–1815), so the time period crosses over with most of Jane Austen’s novels. That means some of the fashions look familiar, and a major scene takes place at a ball.

2. The superb casting. At first it seemed strange to see Paul Dano, an indie movie favorite, in a TV role, but I quickly saw why he was just right for the part of earnest, indecisive Count Pierre Bezukhov. An illegitimate son who wants to live a meaningful life but keeps falling into dissolute behavior, Pierre unexpectedly inherits his father’s fortune and marries the wrong woman, yet turns personal disappointment to the good when he devotes himself to serving his fellow man through the Masons. With his little smile, deliberate speech and round glasses, Dano is perfect.

Initially Lily James, as Natasha Rostova, seems to be just like her bubbly, flirtatious Downton Abbey character, Lady Rose, but suffering and regret chasten her. I also loved Jim Broadbent as irascible Prince Nikolai Bolkonsky and Adrian Edmondson (especially with his fez and other assorted headgear) as the Micawber-ish Count Ilya Rostov. Callum Turner and Tuppence Middleton as Anatole Kuragin and Hélène Kuragina are a skeevy, scheming brother-and-sister pair worthy of Dangerous Liaisons.

3. The authentic settings. The series was filmed on location in Latvia, Lithuania, and Russia, including at the Catherine Palace outside St. Petersburg. It makes a difference to know this wasn’t shot in a London studio; the dachas, Orthodox churches and snowy vistas are all genuine.

4. The action scenes. The CGI crowd shots are unconvincing, but the up-close battle scenes are excellent: bombs, bayonets, amputations and all. Seeing one battle, Borodin, partially from Pierre’s viewpoint is an especially effective way of contrasting civilian life with soldiers’ daily reality.

5. The philosophical depth. I should have known what I was in for from a Russian novel, but I was startled afresh each time a character paused to stare death in the face or to question what his or her life was heading towards and consider how to change course. There are beautifully symbolic moments of forgiveness between separated sweethearts or former rivals. Another highlight is when Pierre, the rich count temporarily laid low, connects with a peasant and his dog. He even learns how to eat mindfully.

Now for something I didn’t like: with the mixture of cut-glass British and toned-down American accents, you’d be forgiven for thinking this takes place in an English-speaking country. It takes characters singing folk songs in Russian, wearing bearskin hats and participating in Orthodox rituals to remind you that, oh yeah, this is Russia. I’m not saying I wish the actors had all spoken in heavy Slavic accents, but especially after an extended period in a refined drawing room, it can be jolting to see onion domes and Cossack uniforms.

I’m not sure if I’ll ever read War & Peace; I have a feeling that, like Moby-Dick (an assigned book I never made it all the way through in college), it could have done with an editor. Even though I adore Tolstoy’s storyline and characters, I don’t think I’d have patience for long passages of historical exposition. Moreover, Philip Hensher (in a Guardian reader’s guide) thinks War & Peace has the worst opening and closing lines in literature. Actually reading the Russian masters can wait for another time.

For now, I’m happy to have seen this top-notch adaptation. In just six hours of television, Davies and director Tom Harper brought an epic world classic into vibrant life, full of romance, betrayal, sacrifice and redemption.

If you’ve already seen War & Peace and are interested in reading more about it, this appreciation piece by Clive James in the Guardian is great (but spoilers abound). See also this interview with Andrew Davies.

Have you seen the miniseries? If so, what did you think? I’m particularly interested to hear how it matched up to the book if any of you are familiar with both.