Dickens: Not Just for Christmas

Charles Dickens is almost singlehandedly responsible for creating our view of the traditional Christmas. It’s no surprise, then, that many people associate him with the holiday season. An armchair next to a fire somehow seems like the ideal place for curling up with one of his chunky tomes. I know some readers who try to pick up one of his books every winter, like Lucy over at Literary Relish. This year my husband is reading a facsimile edition of the original serialized version of Hard Times (re-issued by Stanford University’s Discovering Dickens project in 2005) in the run-up to Christmas, and also plans to get through The Cricket on the Hearth. One of my goals for 2016 is to return to Dombey and Son, which I got about 200 pages into a few years ago but never managed to finish.

We’ve also been lucky enough to catch a number of Dickens-themed theatre productions over the years: in London, Patrick Stewart’s one-man production of A Christmas Carol and Simon Callow’s one-man The Mystery of Charles Dickens, an open-air version of A Christmas Carol that took place around the streets of York, and, this year, Dickens Abridged at Norden Farm Centre for the Arts near Maidenhead. This was from Adam Long, the same brilliant mind that, as a founding member of The Reduced Shakespeare Company, helped create The Complete Works of William Shakespeare (abridged) as well as The Complete History of America (abridged) and The Bible: The Complete Word of God (abridged). I’ve seen four of their shows now, and all were utterly hilarious.

A spooky scene: walking the streets of York for a wandering production of A Christmas Carol. 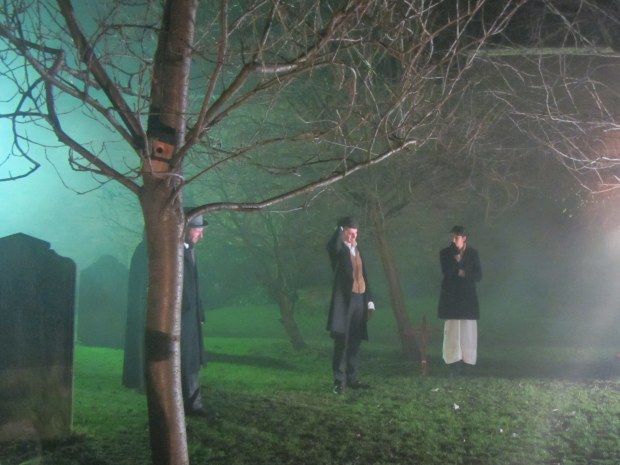 York Christmas Carol: stopping for a scene in a graveyard.

To our surprise, Dickens Abridged was basically a musical in a comedy folk style. We were reminded of Flight of the Conchords or Folk On. There were just four male actors on stage playing all the historical and fictional roles, including, of course, all the female ones. Some of Dickens’s novels didn’t even get a mention (though did I really expect Barnaby Rudge to turn up?!), others got the briefest of nods, and some came in for extensive treatment. 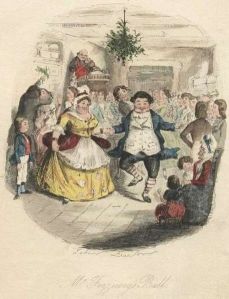 There were long scenes from Oliver Twist, Great Expectations, David Copperfield, A Tale of Two Cities, and A Christmas Carol, whereas some of the more obscure works merited just few-line limericks sung to a simple guitar accompaniment. The problem with these was that the actor was singing so quickly and without amplification that, if you didn’t already know the novel’s storyline, his extremely abridged version would leave you none the wiser.

Among the show’s highlights were the guillotine scene in A Tale of Two Cities, Tiny Tim’s amazing transforming crutch, and the refrain sung by Dickens: “I am a man of anxiety and sorrow” – sung in a 1980s power ballad style, if you can imagine that.

What I found most remarkable about this production was how it was not just the abridged works of Dickens but also the abridged life of Dickens. His time at the blacking factory and his marriage to Catherine Hogarth are two turning points that the play emphasized to good effect. Some readers only vaguely familiar with Dickens might not know about his troubled marriage and the divorce case that left Catherine in disgrace as Dickens took up with a mistress, young actress Nelly Ternan. So while Dickens Abridged was heavy on the laughs, it was also informative and thoughtful.

Dickens: not just for Christmas, but it’s a good time to dive into his works if you haven’t already.

Is Dickens part of your regular holiday reading? Who are some of your other favorite authors to read at this time of year?