The Seed Collectors & The A to Z of You and Me

The Seed Collectors by Scarlett Thomas

“I have no idea why everyone thinks nature is so benign and glorious and wonderful. All nature is trying to do is kill us as efficiently as possible.” 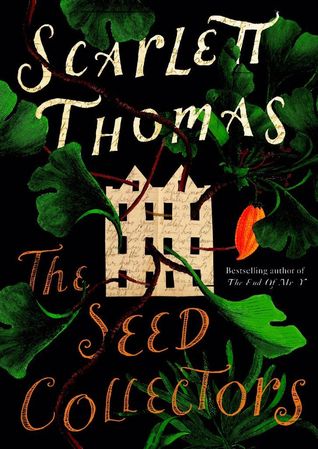 This offbeat novel about obsession, sex and inheritance is set in Kent in 2011 and stars an extended family of botanists. The concept of a family tree has a more than usually literal meaning here given the shared surname is Gardener and most members are named after plants. We have Great-Aunt Oleander, recently deceased; cousin Bryony and her children Holly and Ash; siblings Charlie and Clem (short for Clematis); and half-sister Fleur, who has taken over Oleander’s yoga center, Namaste House. The generation in between was virtually lost, perhaps to a plant-based drug overdose, on a seed collecting expedition to the South Pacific. Oleander has left each motherless child one of these possibly deadly seed pods.

Dave seems to be avoiding the clouds as he works the little plane up into the sky, penetrating it slowly, and really quite gently.

(of peat) It’s like walking on a giant’s pubes.

All lettuce wants is sex. And violence. Just like all plants. It wants to reproduce, and it wants to kill or damage its rivals so they don’t reproduce.

So many flowers are basically little sex booths.

And she was pulling him towards her, deeper into her, as if he were a flower and she an insect desperate for his cheap, sugary nectar.

Connections between characters morph and take on new dimensions as the book goes on. A few characters are unrealized, such as Fleur, which meant I felt slightly disconnected from them. (My ‘favorite’ in a book stuffed full of unlikable figures was probably Bryony, whose hunger for food, alcohol and shopping seems to be endless.) Likewise, not all the storylines are truly essential, so the book seems aimless for its final third; it definitely could have been shorter and tied together better, perhaps with some flashbacks to the previous generation’s experiences on the island to make the past feel more alive. The spiritual element remains vague, although there is a pleasant touch of magic realism along the way.

Despite these reservations, I truly enjoyed Thomas’s unusual writing. She moves freely between characters’ perspectives but also inserts odd second-person asides asking philosophical questions about wasted time and what is truly important in life. One peculiar little section even imagines the point-of-view of a robin in the garden of Namaste House, with made-up words fit for “The Jabberwocky”: “The man is, as always, incompt and untrig. He sloggers around his rooms in his black and grey ragtails like an elderly magpie.”

I like the range of questions you’re left with as a reader: Is nature malicious? Can we overcome our addictions? How much of who we are is down to our parentage? Does life really just come down to sex? The content of the novel might be reminiscent of A.S. Byatt and Andrea Barrett’s science-infused fiction or The World Before Us by Aislinn Hunter, but the style is totally different. I can’t even think who it reminds me of; it feels pretty one of a kind to me. Luckily this is Thomas’s sixth novel, so there’s plenty more for me to explore.

With thanks to Canongate for the free copy, won in a Goodreads giveaway.

Lying in a hospice bed, 40-year-old Ivo looks back on his life. Even after just four short decades and a modest career at a garden center, he has plenty to regret. Hard partying and drug use exacerbated his diabetes and prompted kidney failure. His lifestyle also led indirectly to his girlfriend, a nursing student named Mia (the “you” whom he often addresses directly), leaving him. He’s estranged from his sister and the friends he’d been close to since school days, especially Mal. How did he mess up so badly and cut himself off so completely that he’s now dying alone? And how much can he put right before he goes?

There’s plenty of affecting writing in Hannah’s debut novel, as in one of my favorite passages: “The sun chooses this moment to radiate through to me, through me. It feels like – it feels like life. I can sense my corrupt blood bubbling and basking beneath the surface.” I also love how Hannah captures the routines of institutional life – the sights, smells and sounds that come to define Ivo’s circumscribed life:

Round the corner now. Noticeboard up on the right, pinned every inch over with flyers and leaflets. The papers at the bottom lift and flutter in the convection of the heater beneath.

I am lost in a world of regular hums, distant beeping, the periodic reheating of the coffee machine in the corridor, and that steady kazoo [of his next-door neighbor’s breathing].

Nurse Sheila and Amber, the daughter of another hospice patient, are great supporting characters. Sheila’s A to Z game, encouraging Ivo to think of a memory attached to body parts starting with each letter of the alphabet, provides a hokey but effective structure. As Ivo’s condition deteriorates and his thoughts are scrambled by morphine, his narration gradually becomes less coherent and more insular. This means that by the time we reach the conclusion (which somehow manages to be both predictable and shocking at the same time), we aren’t sure whether he’s giving a reliable account of events or imagining things.

Ultimately, I felt confused about what Hannah meant for the book to be. Is this Irvine Welsh lite? Or a Rachel Joyce style tear-jerker? It’s similar in setup to The Love Song of Miss Queenie Hennessy, you see, and the remembered relationship with Mia is rather sappy. However, keep in mind that in British English the letter Z is pronounced ‘zed’, so the title doesn’t rhyme, which keeps it from being overly twee. Another barrier to my appreciation of the novel was that I never understood why Ivo was dying. People don’t die of kidney failure nowadays, thanks to dialysis and transplantation. (I have a kidney disease, so I should know!)

I’d recommend this book to fans of Mark Haddon, David Nicholls and Donal Ryan. I’ll follow Hannah’s career and hope he can avoid melodrama and a contrived structure – the two near-pitfalls of this one – in the future.

With thanks to Transworld Books for the free copy, won in a Goodreads giveaway.