Almost immediately after our trip to Manchester (see my write-up of the literary destinations), we left again for Dublin, where my husband was attending a Royal Entomological Society conference. Like we did last year when he presented a poster at a conference in Florence, I went along since we only had to pay for my flight and meals.

We stayed north of the Liffey at one of the branches of Jurys Inn. For some reason they put us in a disabled room, which meant the bathroom was a bit odd, but I can’t complain about the breakfast buffet, which included black pudding, soda bread, fruit scones, and particularly delicious porridge.

Across the street was the terrific Chapters bookstore, with extensive secondhand and new stock. I highly recommend the Lonely Planet guide to Dublin, which provided my maps and many of my ideas for the week; I even managed to do 8 of their 10 recommended activities.

On Wednesday I wandered just a few minutes down the road to the Dublin Writers’ Museum. An audio guide takes you through the chronological displays about minor figures as well as the big names like W.B. Yeats, Oscar Wilde, and George Bernard Shaw. One caveat: only dead writers are considered; the museum is definitely missing a trick there – they could easily fill another room with living authors.

A case on Oscar Wilde. (That’s his wife in the portrait.) 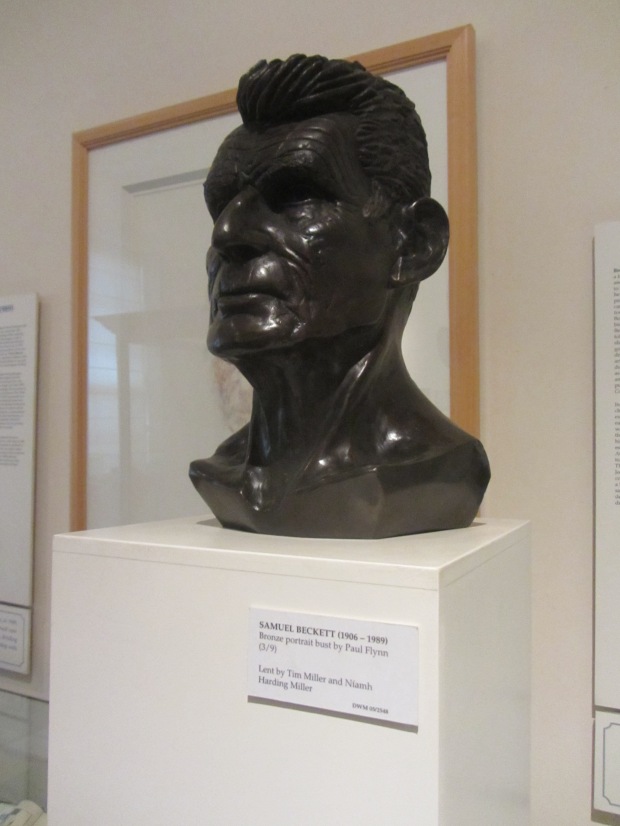 A striking bust of Beckett. 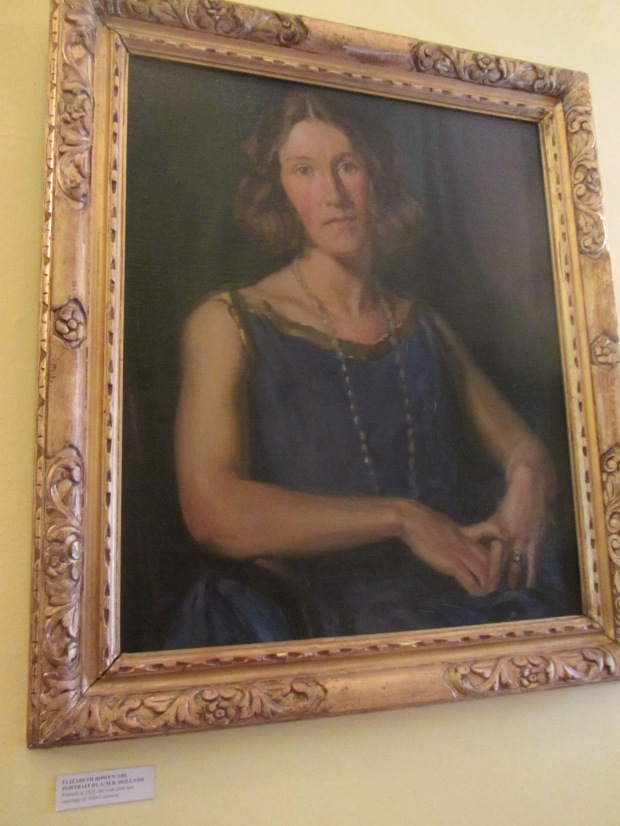 Painting of Elizabeth Bowen (I really need to read something by her…).

On the whole I found the place looking a bit shabby nowadays, but I passed a pleasant hour and a half here before popping a few doors down to the Dublin City Gallery, where they have multiple paintings by Jack B. Yeats (William Butler’s brother) as well as gems like a Monet and a Monet.

The museum could do with a little TLC.

On Thursday I used the DK guide for a recommended walk through literary and Georgian Dublin. Along the way I discovered plaques to Yeats, Wilde (his home is now the headquarters of the American College and not open to the public, alas), ghost story writer Joseph Sheridan LeFanu, Bram Stoker, and Elizabeth Bowen, and a statue of poet Patrick Kavanagh by the canal. Fitzwilliam and Merrion Squares reminded me of London’s Bloomsbury Square (the latter houses a deliciously camp statue of Wilde), and St. Stephen’s Green would be a Hyde Park-type lovely spot for a sunny stroll – though it was drizzling and chilly as I walked through. 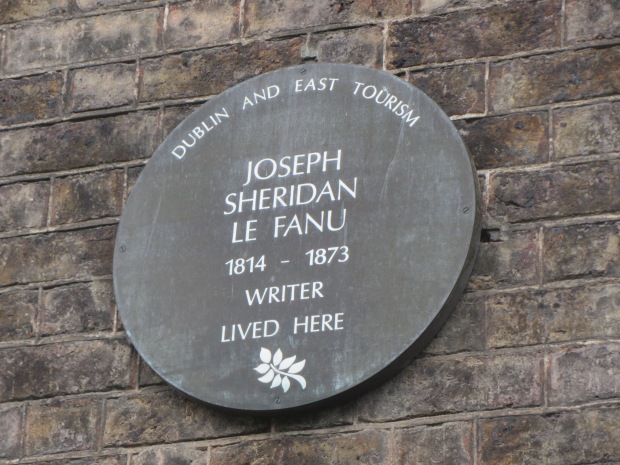 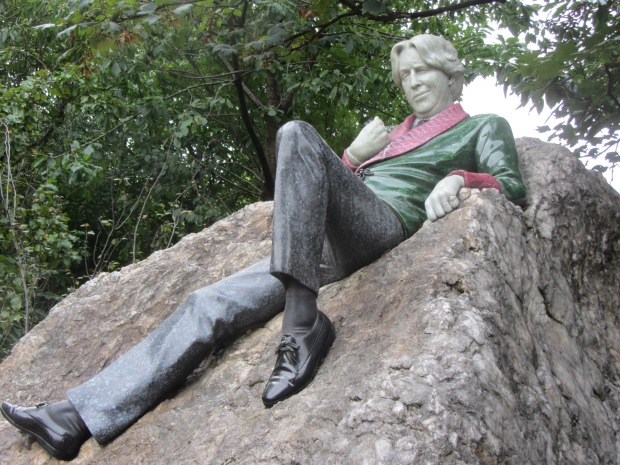 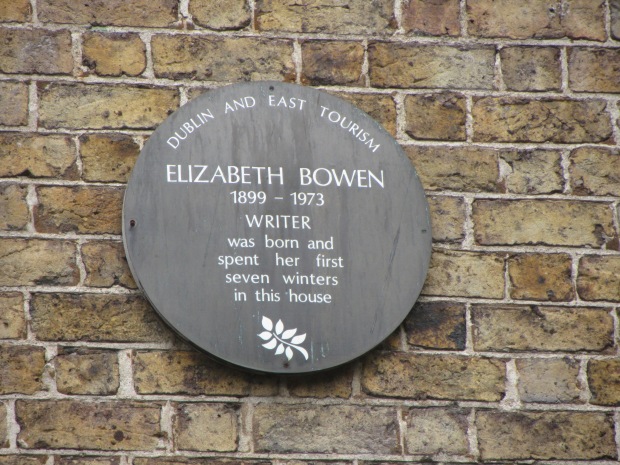 At the National Museum (Archaeology), I learned about Brian Boru, the national hero who kicked out the Vikings at the Battle of Clontarf and united the country.

My husband’s conference was at Trinity College, so he had a special chance to look in at the Old Library and the Book of Kells for a discounted price, but I didn’t end up going. On Thursday night we did something quintessentially Irish: found a pub with live traditional Irish folk music. Although we paid through the teeth for a pint of Guinness and a bottle of cider, it was an experience we wouldn’t have missed.

On Friday, after finishing up some reviewing work in the morning and checking out of the hotel, I returned to the Lonely Planet for a guided walk through Viking and medieval Dublin. The route took in the two cathedrals plus various other churches, ending up at the Castle and the Chester Beatty Library. I skipped the former but enjoyed a brief look at the rare books and manuscripts of the latter (mostly relating to the Far East, with a special focus on Asian religions) before walking back to the National Gallery to see the permanent collection.

That afternoon we moved on to Howth, a Dublin suburb only about 20 minutes away on the DART commuter train, but that somehow feels a world away: it’s a pleasant seaside village with heather- and gorse-covered hills and a lighthouse. It felt good to get out of the city – which was extremely busy and seemed to be mostly full of fellow tourists and the homeless – even if just for a little while.

This was our first AirBnB experience and turned out well after some unfortunate communication difficulties. Before settling in to our B&B we found a cheap and filling meal of fish and chips. The next day we explored the cliffs and met some friendly hooded crows before heading back into Dublin for a look at the wonderfully musty Natural History Museum and an excellent dinner at The Woollen Mills (interesting American fusion food: I had pork belly mac & cheese, and our dessert platter included an Oreo peanut butter tart). 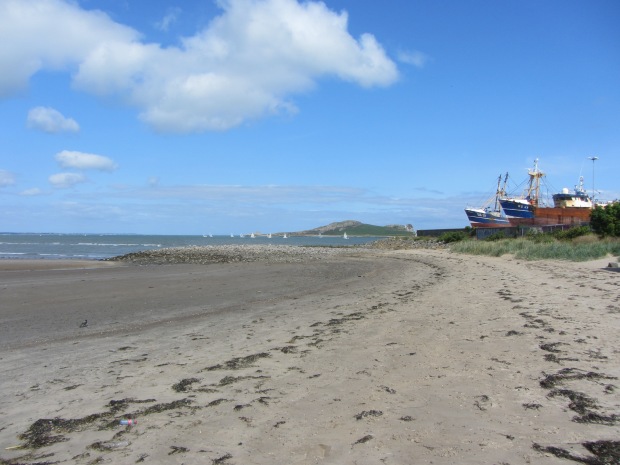 My overall feeling was that Dublin still isn’t making as much of its literary heritage as it might do. I was perhaps not as impressed as I’d hoped to be – it’s a lot like London, and not as quaint as I might have expected. Still, I’m glad I went. Next time, though, I suspect we’ll go to less inhabited and more picturesque areas in the south and west.

I hadn’t the courage to face Joyce’s Ulysses or some other monolith of Irish literature, but I did continue Anne Enright’s The Green Road while in Dublin. I was also working on My Salinger Year by Joanna Rakoff, Of Human Bondage by W. Somerset Maugham (my current doorstopper), and The Heart Goes Last by Margaret Atwood.

Any comments about Ireland and its literary sites and/or heroes are most welcome!