“Time devours all things: love and murder and secrets.” 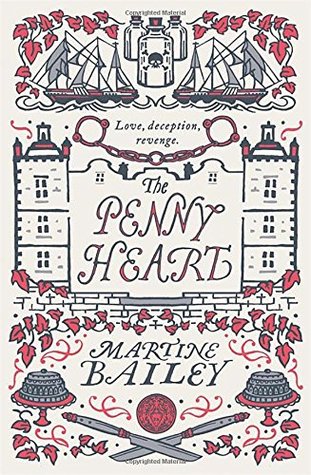 I loved Martine Bailey’s first novel, last year’s An Appetite for Violets.  My description of that one – “lively, well-researched historical fiction, seasoned with mystery and culinary tradition” – is apt here, although this doesn’t quite live up to Bailey’s debut. As in Violets, the setting is the English Midlands in the late eighteenth century, and one of the main characters is a cook at a grand home. However, whereas cook Biddy Leigh herself was the narrator of Violets, through journal entries, here the first-person perspective is that of the mistress of Delafosse Hall (in Greaves, Lancashire), Grace Croxon.

After being dissuaded from making an unfortunate love match, Grace has been pressed into marriage with Michael Croxon, a brooding, almost possessed character. It soon becomes clear that his affections lie elsewhere and he has married Grace for her money, which will fund his ill-fated attempt to set up a mill. My favorite section of the book is the middle, in which Grace is like the Gothic heroine trapped in a spooky house with a distant husband and all kinds of strange goings-on that she doesn’t understand. She reminded me most of the protagonist of Daphne du Maurier’s Rebecca.

At the same time as Grace is trying to figure out what is happening at Delafosse, we also learn the surprising story of how Peg Blissett came to be the Croxons’ new cook. Under another name, she suffered tremendous trials, including transportation to Australia and a dramatic escape to live with New Zealand natives. She also lost her true love, Jack, and on her return to England determines to have her revenge on the man responsible for sending her to prison.

It takes a while to figure out how Peg’s story ties in with Grace and Michael’s, and the plot gets very melodramatic towards the end, with hints of the Victorian sensation novel, but overall it’s a satisfying and atmospheric tale. It’s mostly in comparison with Violets that I locate this book’s weaknesses: a first-person narrative from Peg would have been more interesting, as well as fairer to her own story (and she would seem less like a pantomime villainess towards the end); and the date and place information plus recipes heading each section feel largely unnecessary, whereas they were integral to the previous book.

I kept getting a funny feeling as I was reading that this book must have been written first and later revised to capitalize on the success of Violets, which might account for the way that the culinary theme seems slightly shoehorned in here. Still, Bailey comes up with memorable characters and plots, with the kinds of twists and turns that keep you wondering where it will all lead. I hope that her third novel will break new ground rather than just repeating themes and structures she’s used before.

I was delighted to win a free copy through a Goodreads First Reads giveaway.