Like the Roberto Benigni film Life Is Beautiful, Virginia Baily’s second novel* shows how the Holocaust affected Italy’s Jews. It’s not a Holocaust novel, though; it’s a before-and-after story that’s more about adoption, coming of age when you don’t know who you are, and adapting to motherhood. It’s about choices, inevitabilities, regrets and a love that endures. 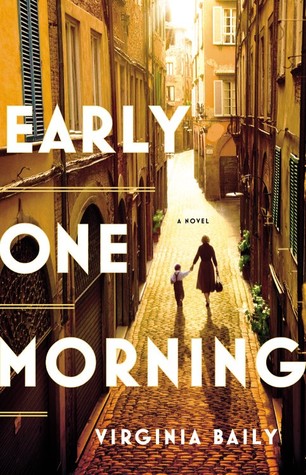 October 1943: Chiara Ravello is walking near Rome’s Jewish ghetto when she spots a large group of people being herded into trucks. A Jewish woman catches her eye and directs her seven-year-old son to go with Chiara. Pretending the boy is her nephew, Chiara saves him from certain death. The war years have been a hard time for the Ravello family: Chiara’s father and her fiancé both died about five years ago, and her mother perished in a bombing a few months ago. Now she and her epileptic sister Cecilia are preparing to flee the occupation by taking refuge in their grandmother’s home in the hills above Rome. Chiara never expected to be a mother after Carlo’s death, but now she has the chance to raise Daniele Levi as her own.

That’s where many novels would have ended it: with a hopeful conclusion after a time of hardship; with a new beginning spooling out in the future. Instead, this is where Baily starts her bittersweet tale. It’s no happily ever after for Chiara and Daniele; indeed, over the years that Daniele is a silent, sullen boy, then a rebellious teenager, and finally a drug addict, Chiara will frequently question the impulsive choice she made that morning in 1943. She seems doomed, in Daniele’s eyes at least, to be “the wicked stepmother, half-provider, half-tyrant.” This gives the novel something of the flavor of Lionel Shriver’s We Need to Talk about Kevin, another rare instance of fictional ambivalence about motherhood.

There’s an extra layer to the novel, however. In 1973, Chiara learns that Daniele has a daughter he never knew: Maria, now 16, lives with her mother in Wales. Angry and unsure of her new identity, Maria has boycotted her school leaving exams and asks to live with Chiara for the summer instead. Baily describes these two very different characters equally well, and does a great job of capturing the feel of Rome and its surroundings, especially through Maria’s viewpoint. She also moves deftly between the events of 1943–44 and those of 1973 in alternating chapters, giving subtle clues as to the time period through her interesting choice of tense: right up to the last chapter, she uses the present tense to describe past action, and the past tense for current action.

Through the flashbacks, we learn surprising truths about how Chiara abandoned a family member and gained a best friend. She made dubious choices during the war, but also showed great bravery and generosity. Baily gives just enough away, and so gradually that the novel’s nearly 400 pages pass quickly. In touching on World War II and the Holocaust only peripherally, the novel avoids well-worn, clichéd narratives and does something new.

The writing does not draw attention to itself; there are no long-winded descriptions or ornate sentences. Baily relies more on food (as in “[Maria’s] insides were lubricated with olive oil”) and period fashion to add detail and local color. Still, where there is metaphorical language it usually refers to animals and seems both appropriate and evocative. I also love the warm, earthy tones of the book’s cover, which reminds me of my time spent in Tuscany last year. However, I’m not sure the novel’s title works; it doesn’t say enough about the book.

Still, I admire how Baily takes what seems like a familiar Holocaust rescue story and turns it on its head. A late passage in which Chiara watches over Daniele as he sleeps off a hangover hints at the emotional ambiguities she conveys here:

Funny how sometimes she used to think that because he had this horseshoe birthmark, a talisman of good fortune imprinted in his skin, he carried his luck with him. How she persisted in thinking it was luck that had saved him when the rest of his family had perished, and not, as he seems to want to demonstrate to her, its opposite.

‘So why are you so intent on throwing your life away?’ she has asked him, but he doesn’t seem to have an answer.

I would particularly recommend this novel to fans of Maggie O’Farrell and Anthony Doerr. Read this alongside Julia Blackburn’s Thin Paths or another choice from my Italian summer reading list – it’s the next best thing to being there.

*At first I presumed this was a debut, but it turns out she wrote one novel previously, under the name Ginny Baily, Africa Junction (2011).

Many thanks to Virago for my free copy, received through a newsletter giveaway.